Under the failed economic policies of Joe Biden, Americans are suffering from crippling levels of inflation - the highest in over 40 years. While Washington remains more interested in partisan dysfunction and empty rhetoric than actually delivering solutions, Governor Hogan has shown a better path forward.

Under Governor Hogan’s leadership, Maryland produced the greatest economic turnaround in America, going from 49th out of 50 states to number six by cutting taxes eight years in a row by $4.7 billion and eliminating thousands of regulations.

In this present crisis, An America United believes Washington can provide real relief to the American people by following Governor Hogan’s lead. The following five common sense proposals should be able to attract bipartisan support and provide struggling Americans real and immediate relief.

The Biden Administration’s reckless energy policies have undermined American production and contributed to skyrocketing gas prices and inflation. Governor Hogan has joined with 24 other governors in calling on President Biden to “reverse his policies and restore America’s energy independence.” An America United proposes achieving this goal by removing President Biden’s bans on new oil and gas development on federal lands, building the Keystone XL pipeline, and reinstating regulatory reforms to streamline energy permitting.

While most parts of the tax code are indexed to inflation, several key aspects are not, including for housing gains, social security, and child tax credits. The result is to push many Americans into higher tax brackets, increasing the tax burden for many who are just struggling to get by with higher costs. As the only Republican governor in America to secure tax cuts from an overwhelmingly Democratic legislature, Governor Hogan is a national leader on tax relief. While President Biden and the Democratic majorities in Congress are trying to raise taxes, Governor Hogan has been securing historic tax relief. In just the past two years, Governor Hogan passed the largest tax cuts in state history and has cut taxes eight years in a row by $4.7 billion, securing relief for Marylanders on fixed incomes by nearly eliminating retirement taxes and increasing the earned income tax credit. An America Unites proposes the following tax cuts to curb the inflation tax on struggling Americans:

At a time of worker shortages that increase prices, over-burdensome red tape is keeping far too many Americans out of work. In Maryland, Governor Larry Hogan has been a national leader on this issue, including launching a first-in-the-nation workforce development initiative to eliminate the four-year college degree requirement from thousands of state jobs and recognizing occupational licenses for military families. An America United proposes to remove and reform burdensome licensing regulations that reduce work opportunities for new workers and increase costs for consumers.

In Maryland, Governor Hogan turned a crushing $5.1 billion structural deficit into a record surplus. Governor Hogan also opposed the American Rescue plan, calling it reckless and ‘loaded up with extra goodies.’ He was a leader in cutting out the Build Back Better social programs from the bipartisan infrastructure bill, hosting a summit at the Governor’s mansion in Annapolis where he helped secure a compromise agreement from Democratic leaders in Congress. An America United urges the Biden Administration and Congress to end the reckless spending that’s crushing the American people.

It’s unconscionable that the federal government continues to tax struggling Americans at the gas pump. Governor Hogan was the first governor in the nation to suspend its gas tax, providing much needed relief to hardworking Marylanders. An America United proposes suspending the federal gas tax as well.

Skyrocketing violent crime is wreaking havoc on communities across our country. Instead of thanking our men and women in law enforcement for their service and providing them with the resources they need to keep Americans safe, politicians have too often targeted police as convenient punching bags to promote soft on crime policies and out-of-touch political agendas.

In Maryland, Governor Larry Hogan has been a national leader on supporting our men and women in law enforcement, as well as fighting for common sense proposals that crack down on violent crime and provide support to victims. To reverse the tide of rising crime, An America United urges leaders across the country to follow Governor Hogan’s lead by adopting the following four common sense proposals:

The “Defund the Police” movement has created a chilling effect on effective policing, causing recruitment, morale, and retention to hit all-time lows among law enforcement. Governor Larry Hogan was one of the first elected officials in the country to speak out against this movement, calling it “absurd and ridiculous.” Instead of defunding police, Governor Hogan implemented a first-in-the-nation “Re-fund the Police” initiative, providing half a billion dollars for salary increases, bonuses, expanded training, and additional resources for victim services. An America United calls on leaders across the country to also implement a “Re-fund the Police” package and proposes the following at the federal level:

A massive onslaught of woke political spending has helped elect far-left politicians and prosecutors who refuse to hold violent criminals accountable. Governor Larry Hogan has led the fight against this dangerous approach by pushing for increased prison time for repeat violent offenders, passing legislation to increase transparency around sentences handed down by judges, and providing unprecedented resources for federal prosecutors and warrant initiatives. An America United proposes deploying federal prosecutors to areas where politicians and prosecutors failed to do their jobs. Additionally, we urge local, state, and federal leaders to make sure criminals who assault police officers are held accountable to the full extent of the law.

The Opioid Epidemic has cost us countless lives, tearing families and communities throughout our nation apart. Governor Hogan was the first governor in America to declare a state of emergency to combat this crisis. His administration has made it a top priority over the last eight years to put the resources and support systems in place at every level to expand access to treatment and prevention. To fight back against this epidemic, An America United proposes increasing resources for drug prevention, treatment, and funding for recovery support services as well as implementing policies that limit the amount of opioids that can be prescribed.

The crisis at the border harms every community across our country as criminal cartels continue to smuggle fentanyl, illegal weapons, and other dangerous drugs into our country. In the absence of any leadership from the Biden administration, Governor Hogan joined the “American Governor’s Border Strike Force” to target these criminal cartels. He has repeatedly vetoed sanctuary state legislation that would impede local law enforcement’s ability to cooperate with federal law enforcement. An America United proposes that Washington take action immediately to secure the border, starting by increasing resources and pay for border patrol. 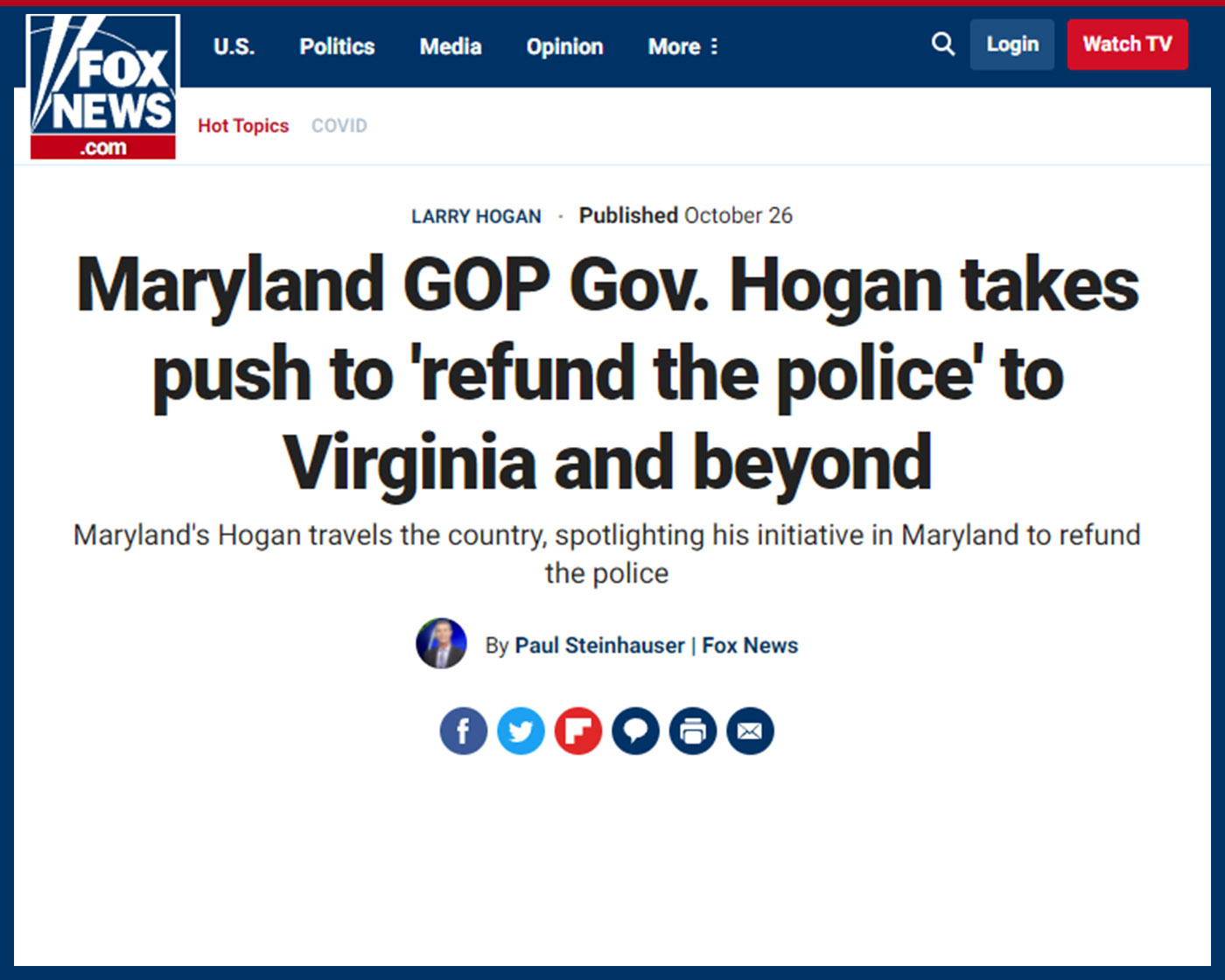 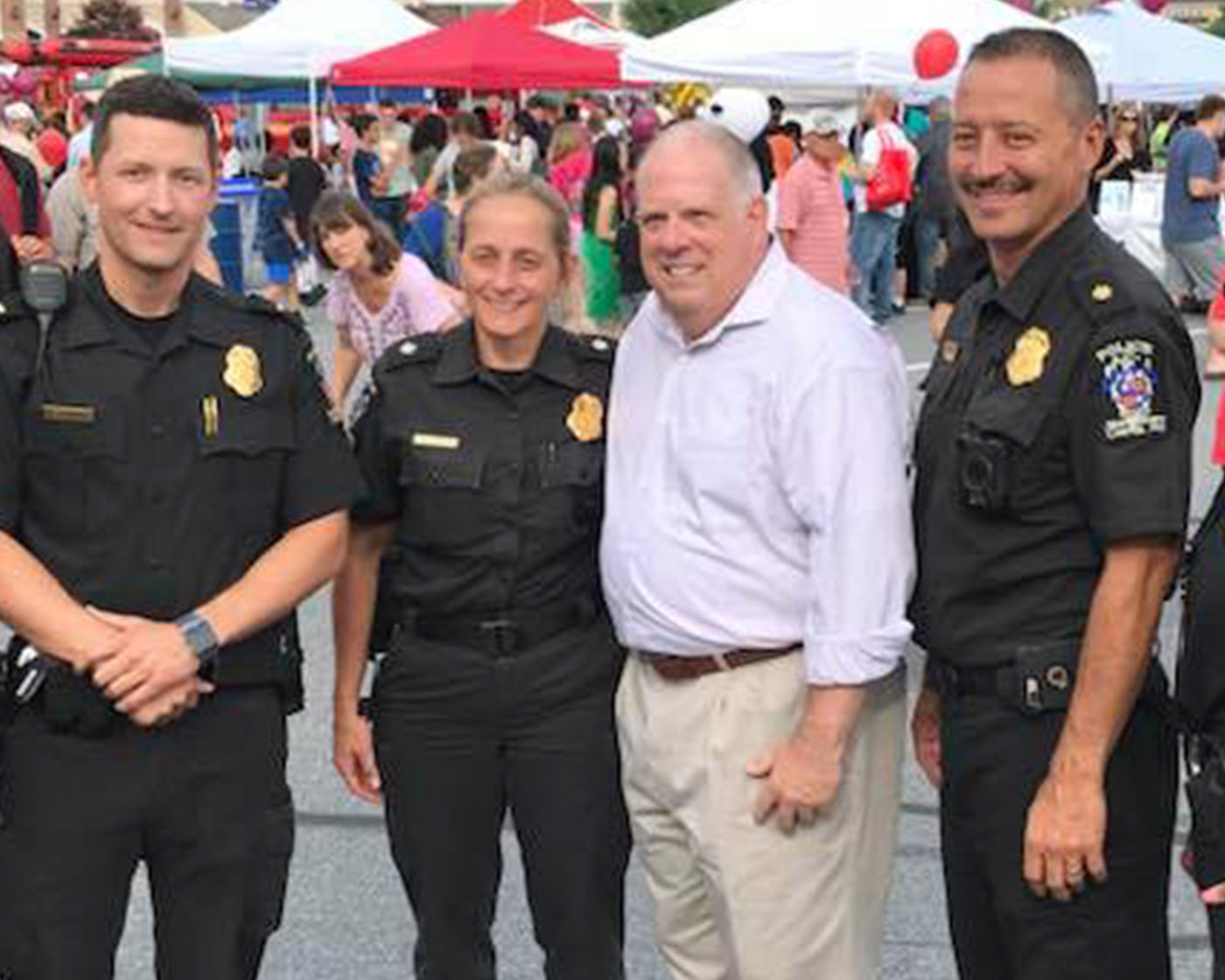 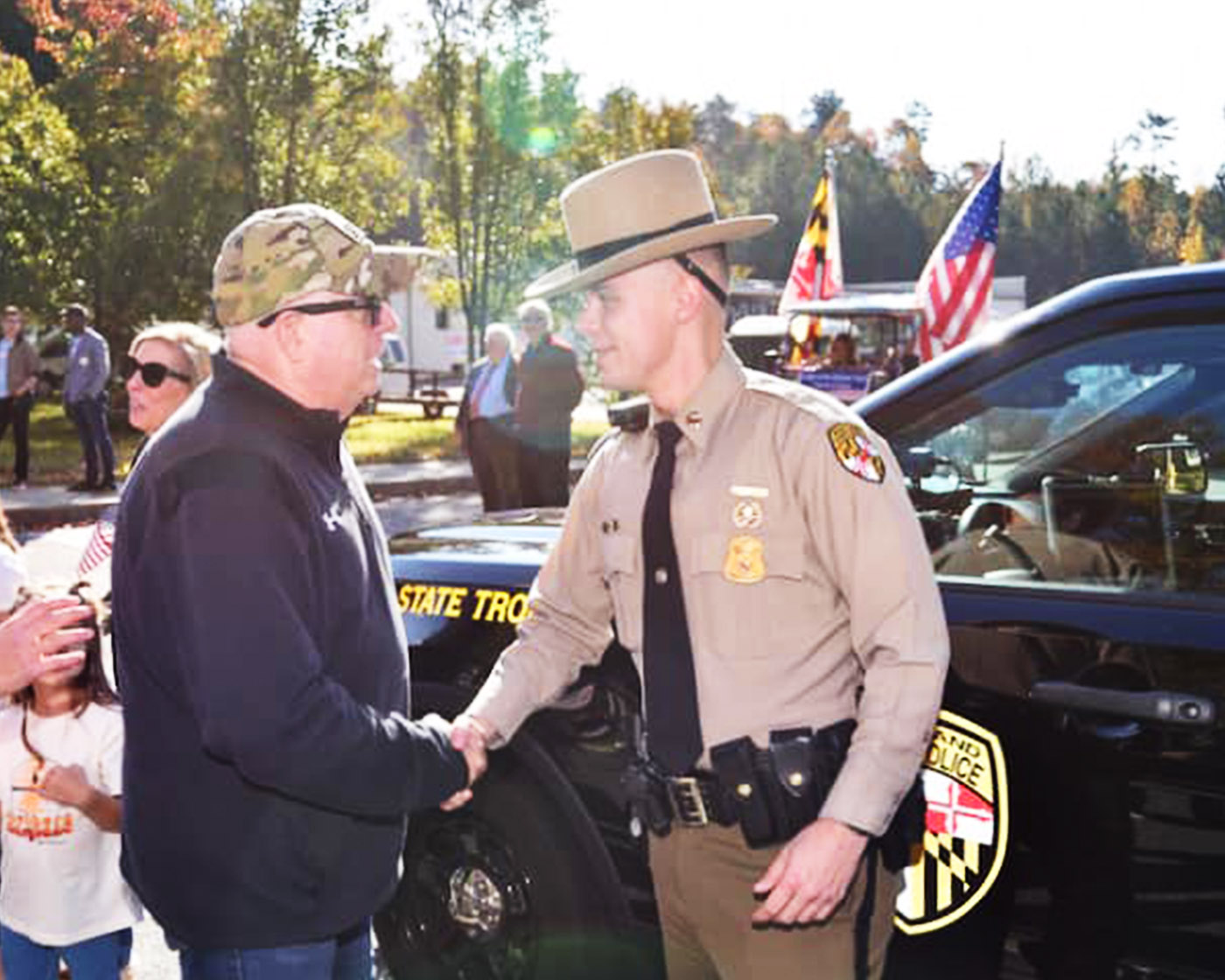 With murders skyrocketing across the country, An America United believes the last thing we should be doing is attacking the men and women who are working to keep us safe.

When the “Defund the Police” movement started gaining momentum, Governor Hogan was one of the first leaders to speak out loudly against it and to completely reject the idea. Governor Hogan has a long track record of support for law enforcement, including his leadership restoring law and order in Baltimore City during the riots of 2015.

Adequate investment in public safety is necessary to recruit and retain quality officers, increase diversity, expand community policing efforts, improve training, and provide better technology and equipment. As calls to “Defund the Police” become increasingly common in Maryland and across the country, An America United is fighting to support police and increase police funding across the country. 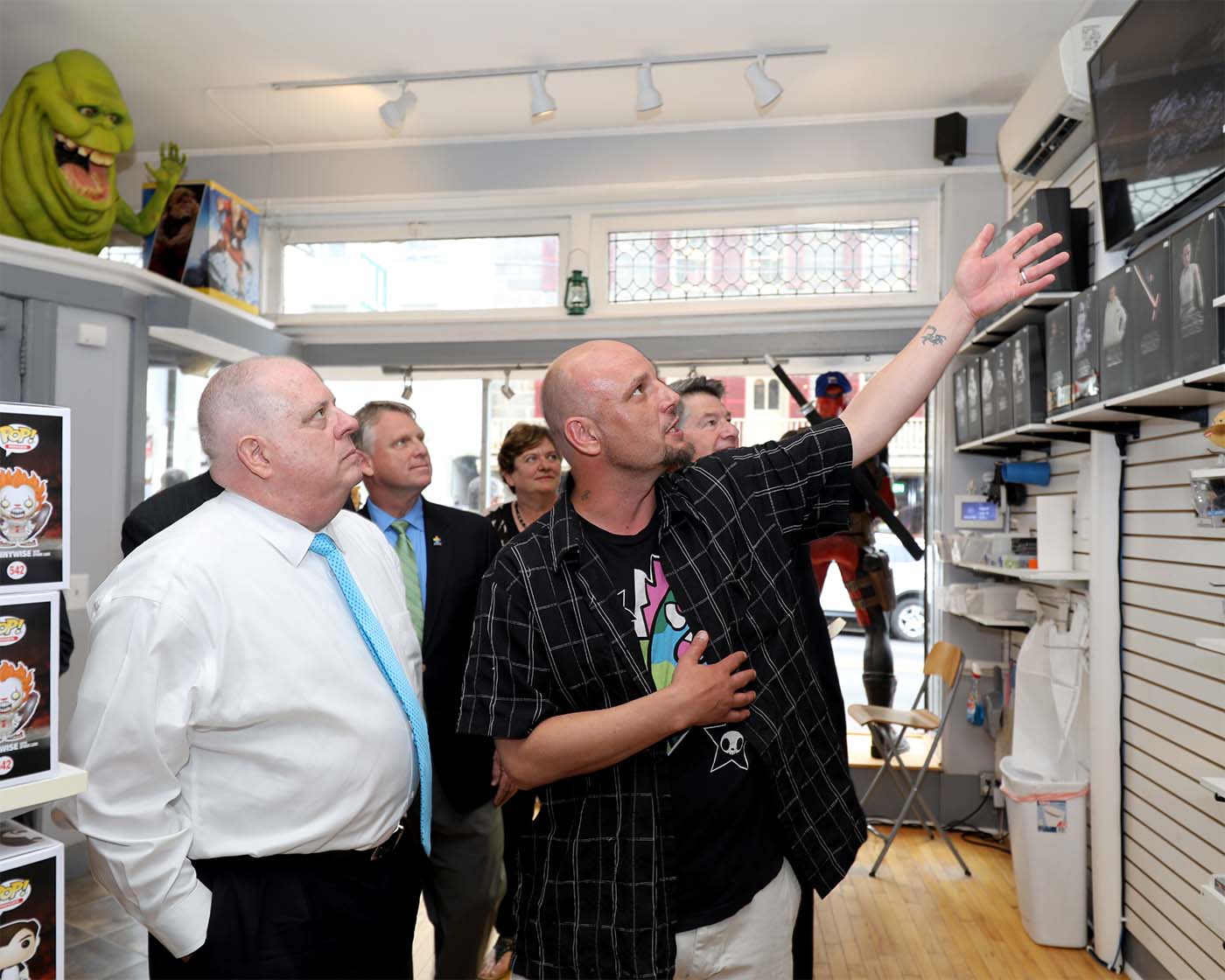 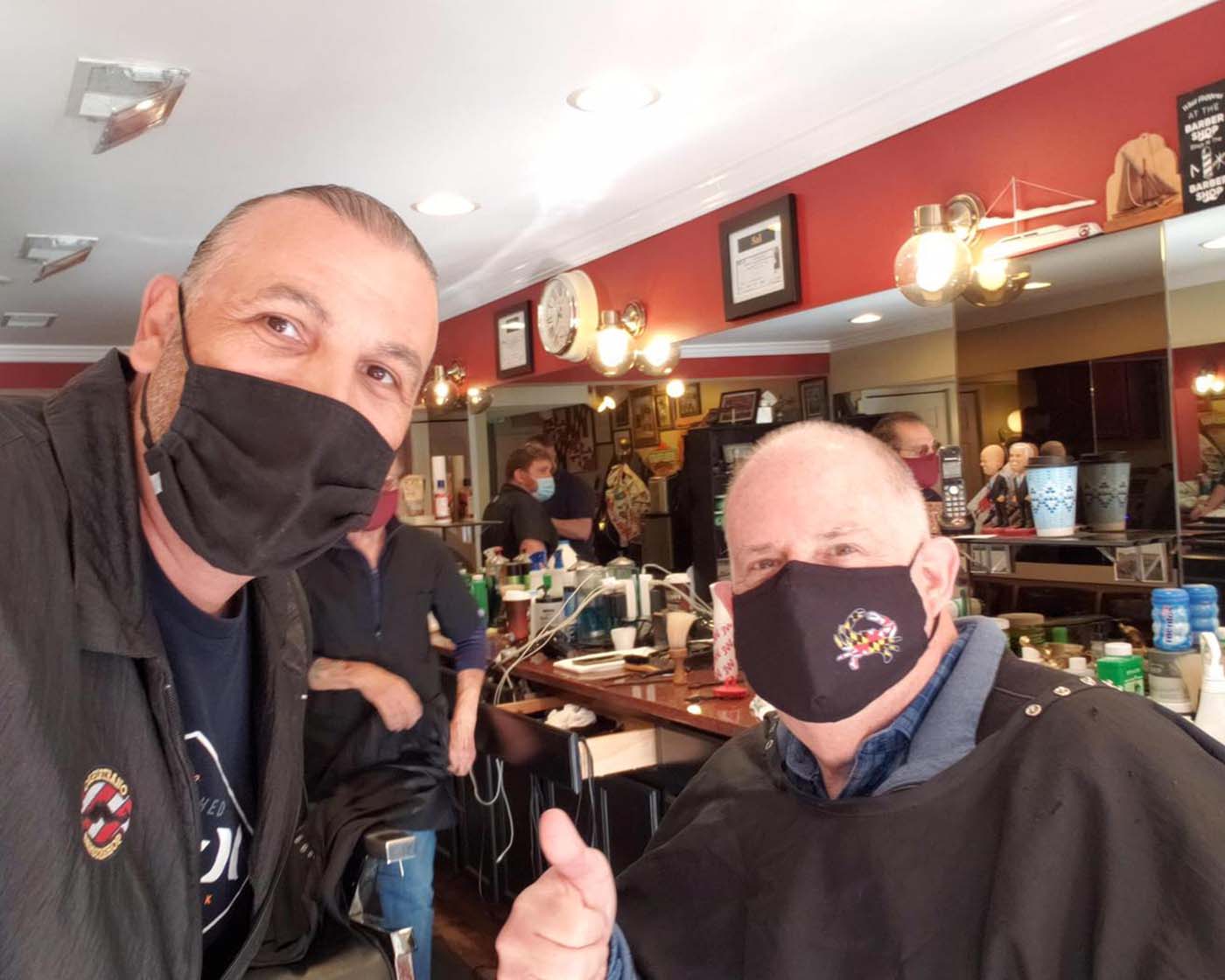 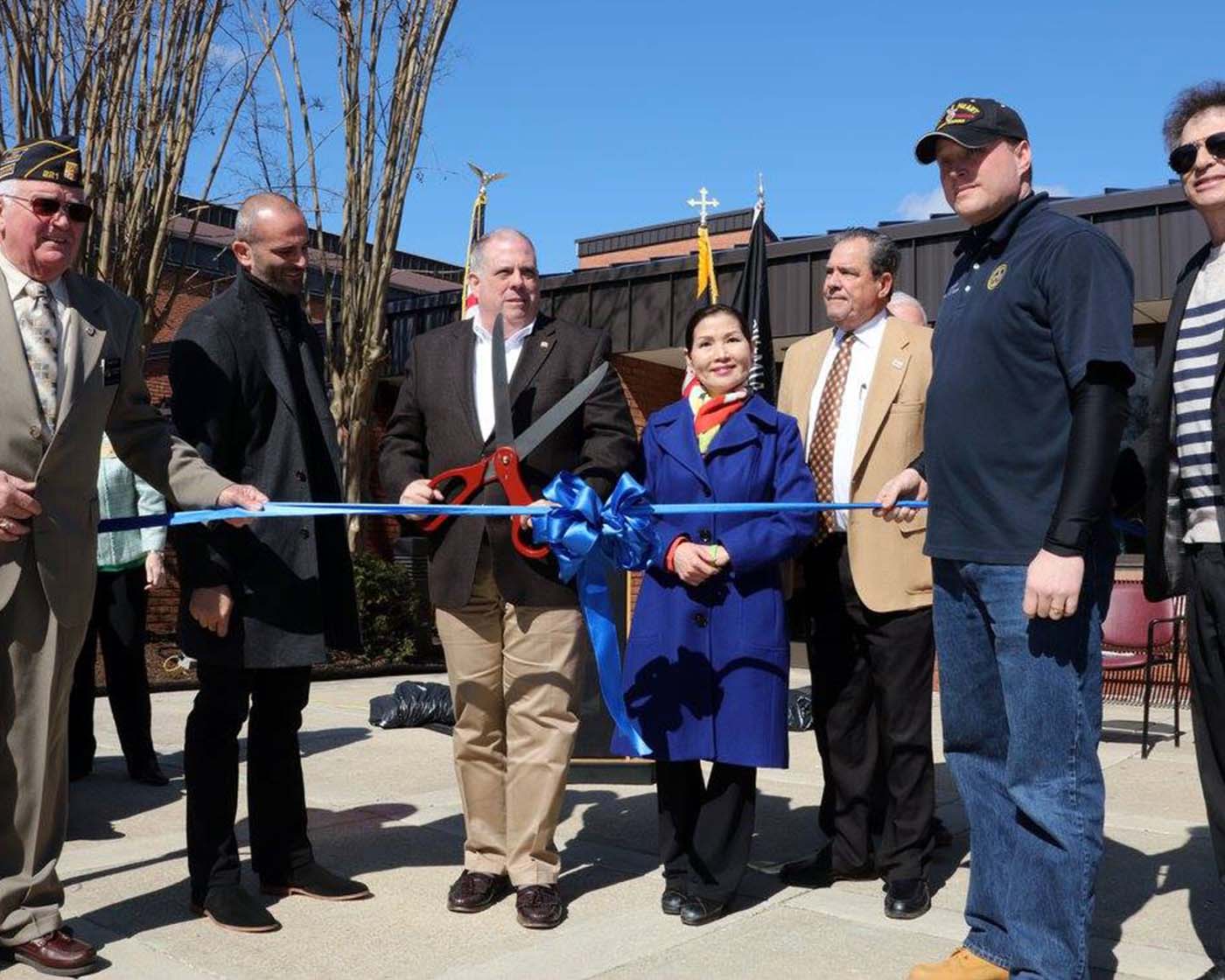 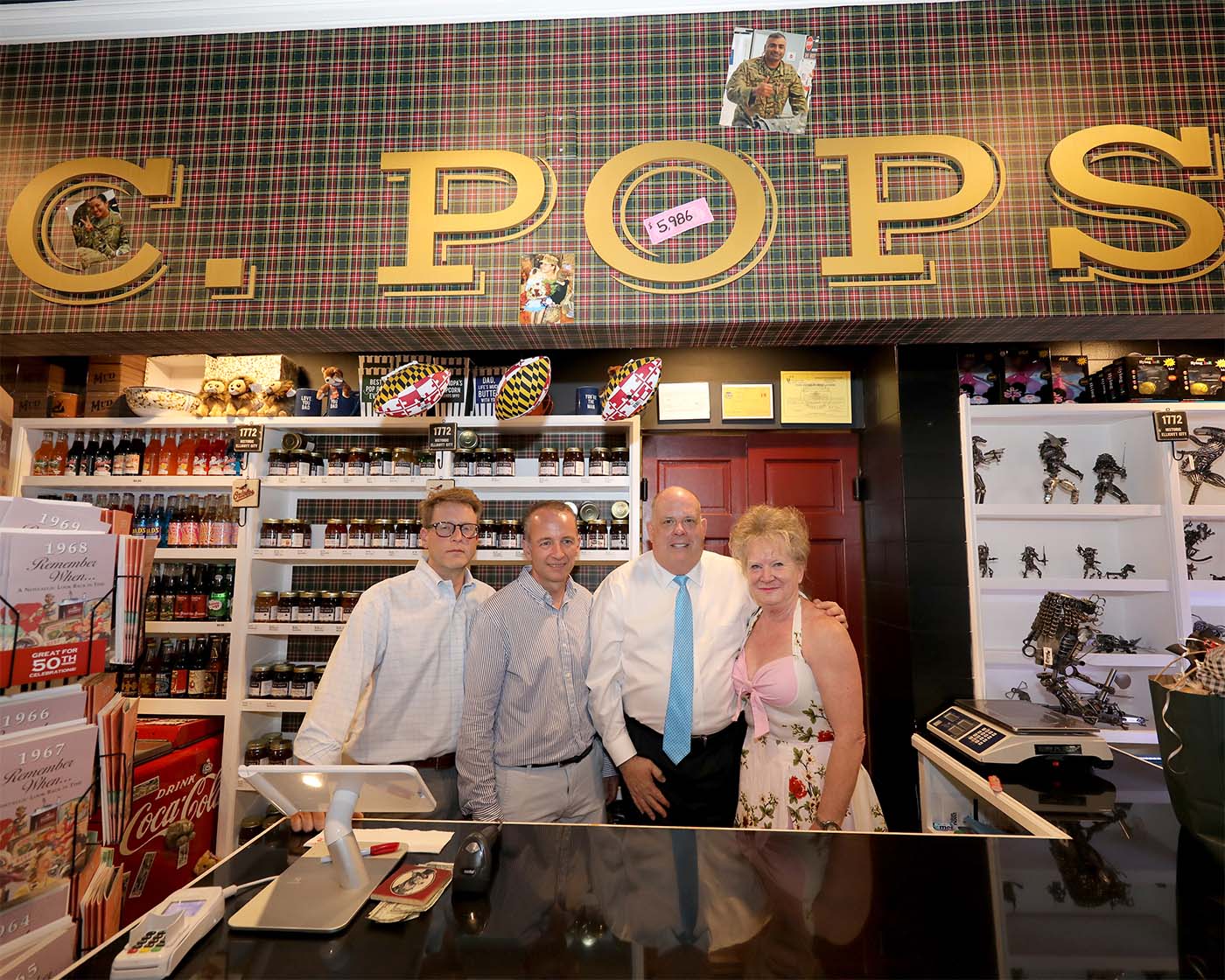 As Governor, Larry Hogan has cut taxes and regulations for seven years in a row, including the largest tax cut in state history, while turning the state’s $5.1 billion deficit into a record $2.5 billion surplus. As a result of his common sense leadership, Maryland produced the greatest economic turnaround in America.

In Washington, politicians are taking the exact opposite approach, jamming through trillions in reckless spending and tax hikes that are strangeling America’s economic recovery and resulting in skyrocketing inflation.

An America United believes that Governor Hogan’s approach in Maryland is the better model for our nation. We are fighting against these extreme policies that are harming struggling families and small businesses. 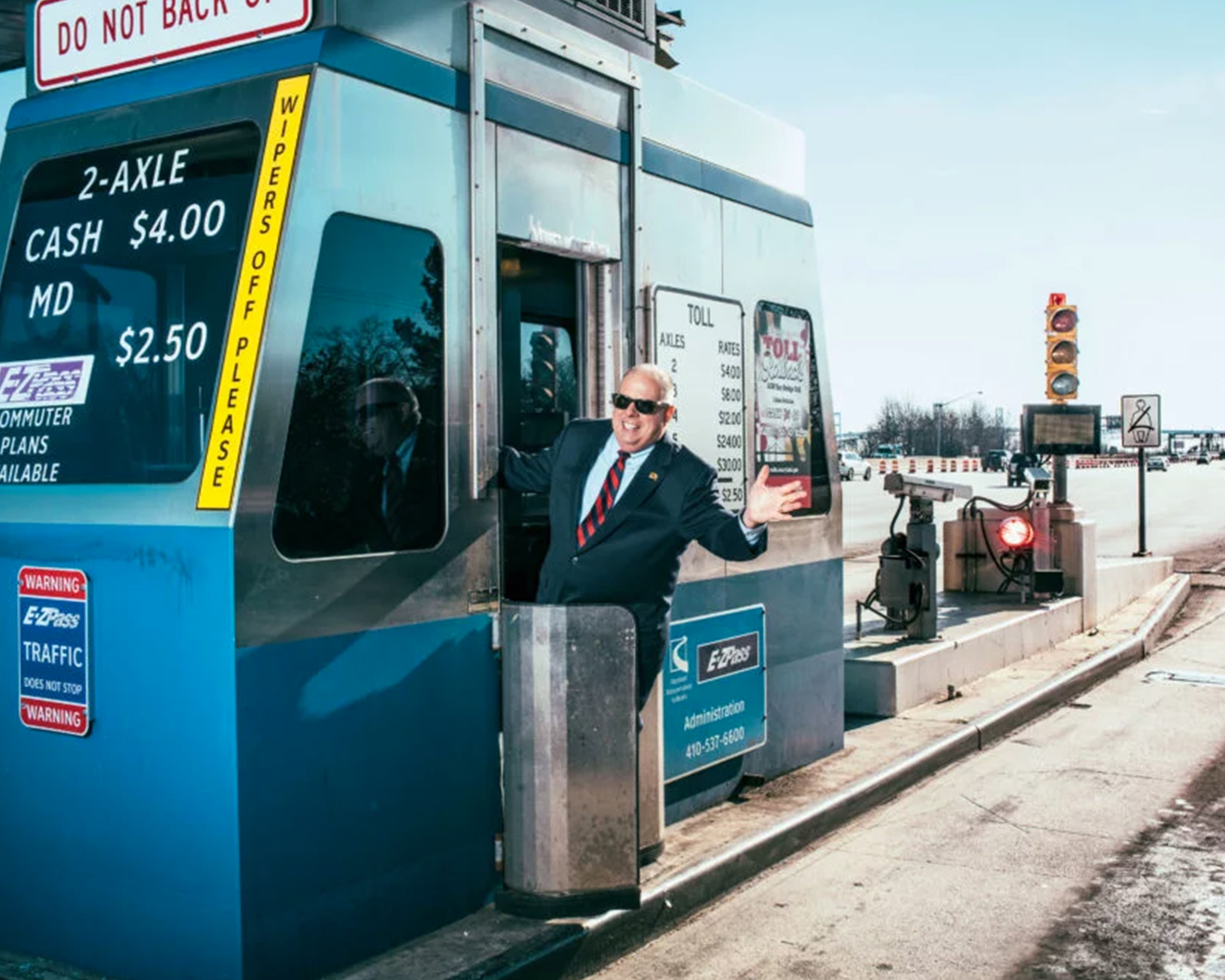 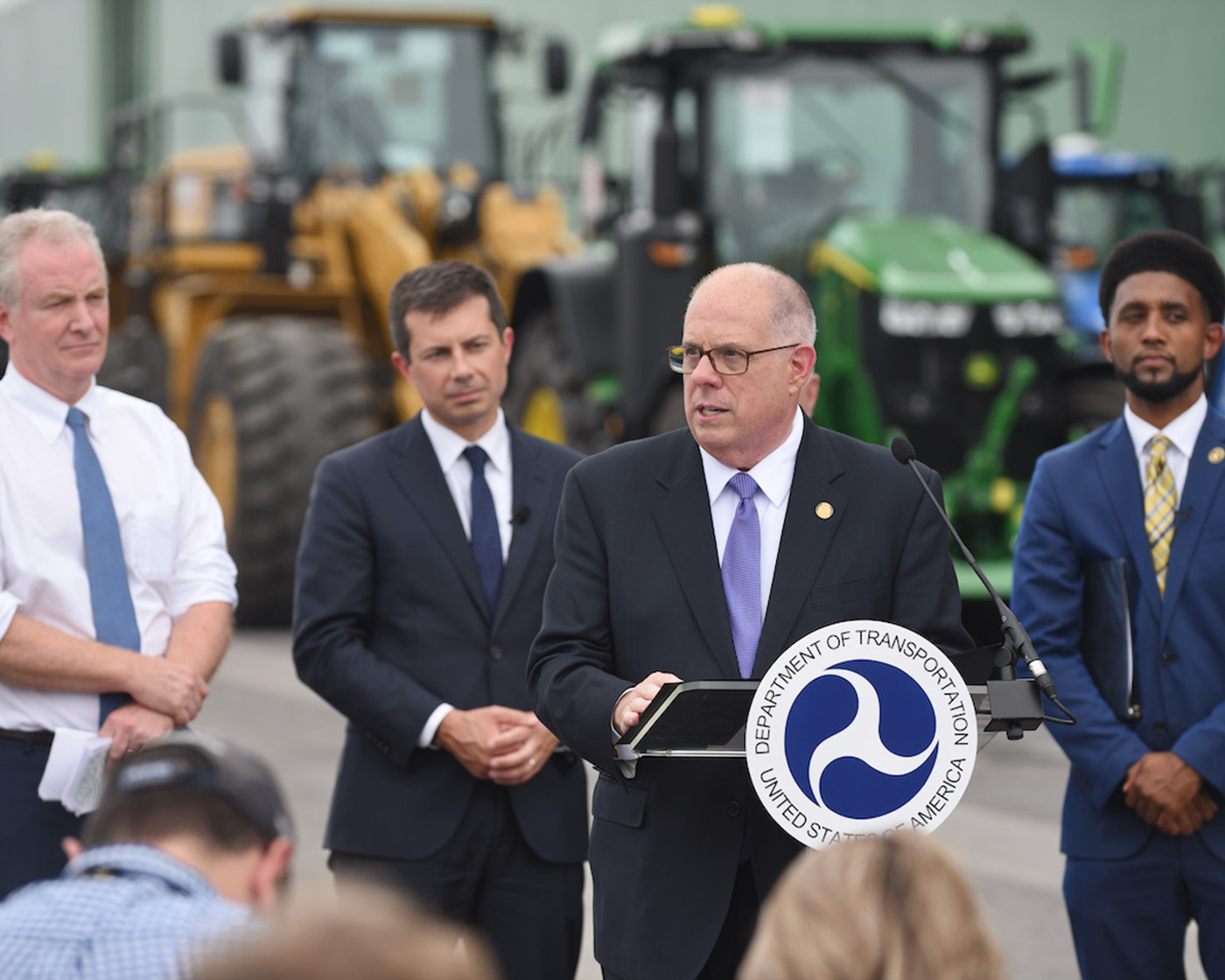 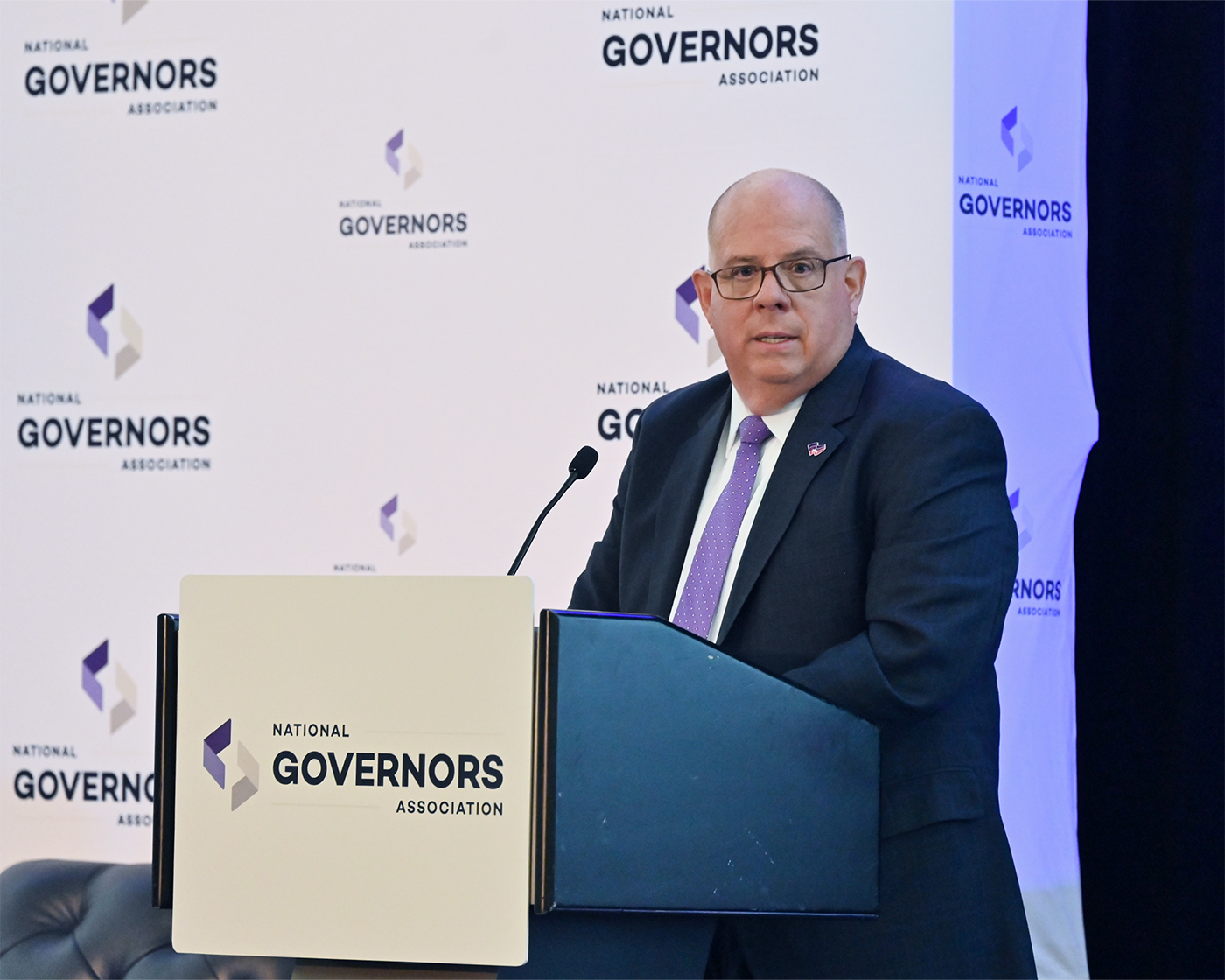 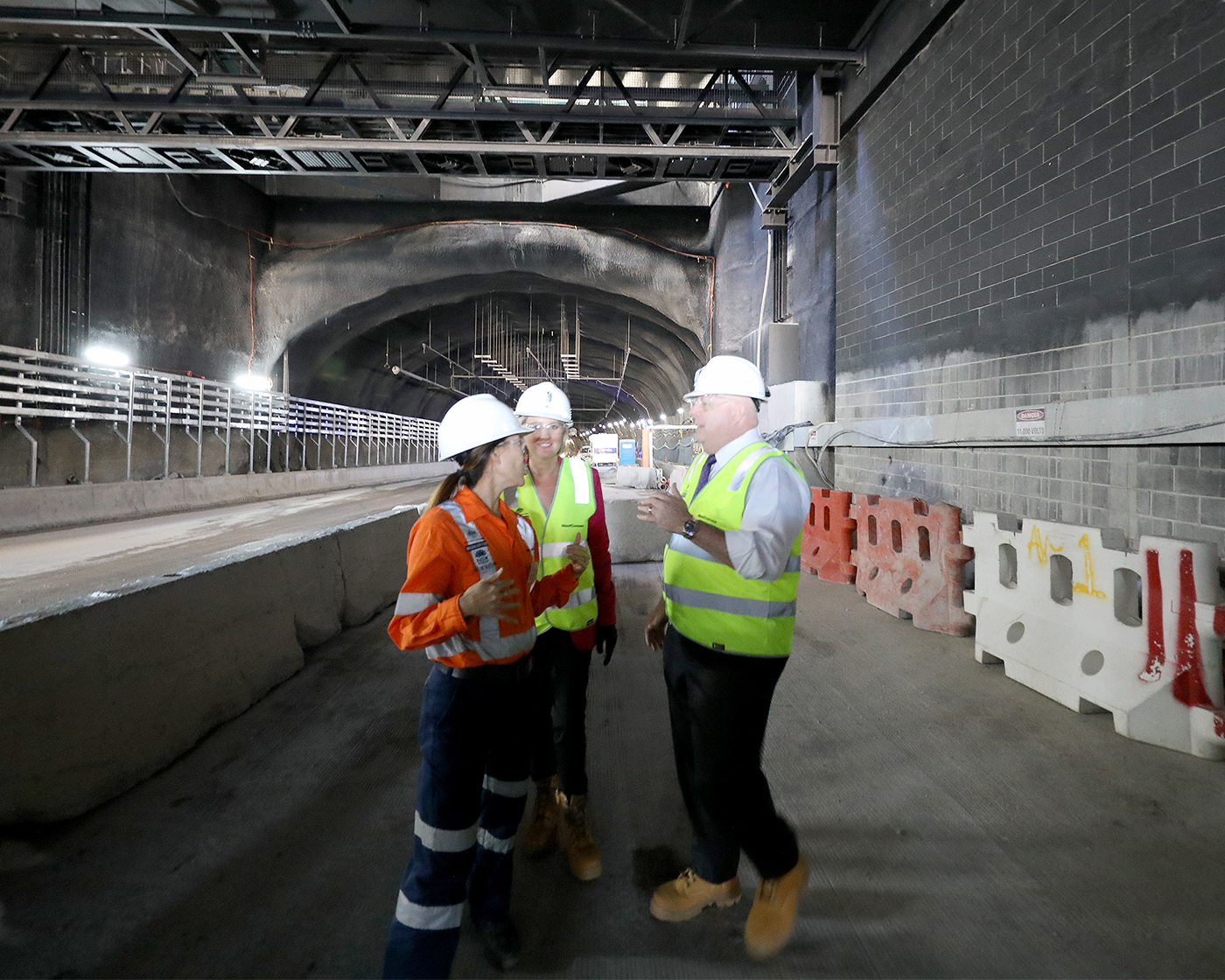 For decades, Republicans and Democrats in Washington agreed that America’s infrastructure desperately needed to be repaired, but refused to do anything about it. While Washington was failing to act, Governor Hogan was leading in Maryland by rebuilding roads and bridges, investing in the Port of Baltimore—keeping it running smoothly through the supply chain crisis— expanding broadband to every corner of the state, and bolstering the grid and cybersecurity. According to CNBC, Maryland was 2021’s most improved state for business because of these vital investments.

Finally, in 2021, thanks to these efforts, An America United helped break the partisan gridlock by spreading Governor Hogan’s message that Republicans and Democrats needed to put politics aside and finally act for the American people. 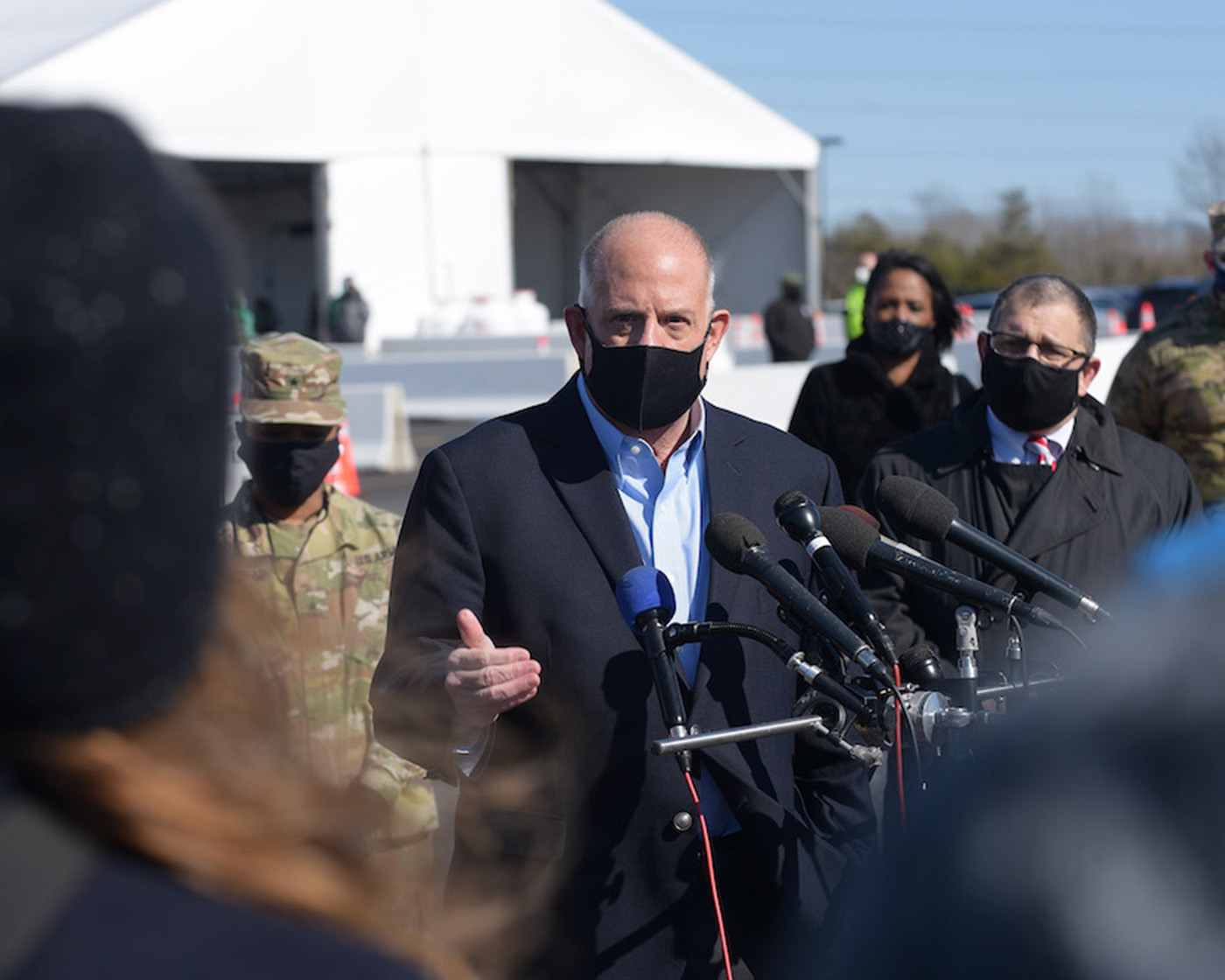 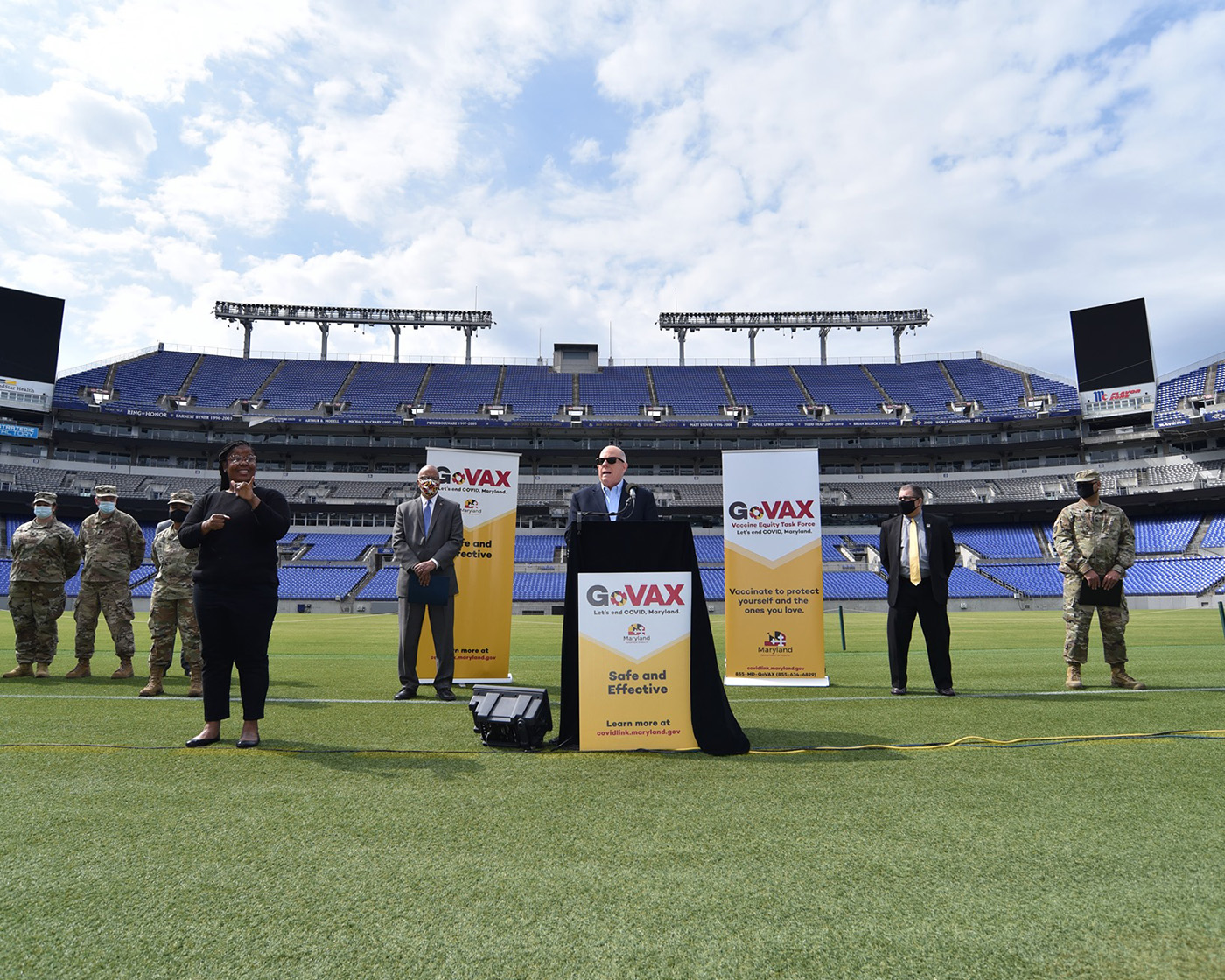 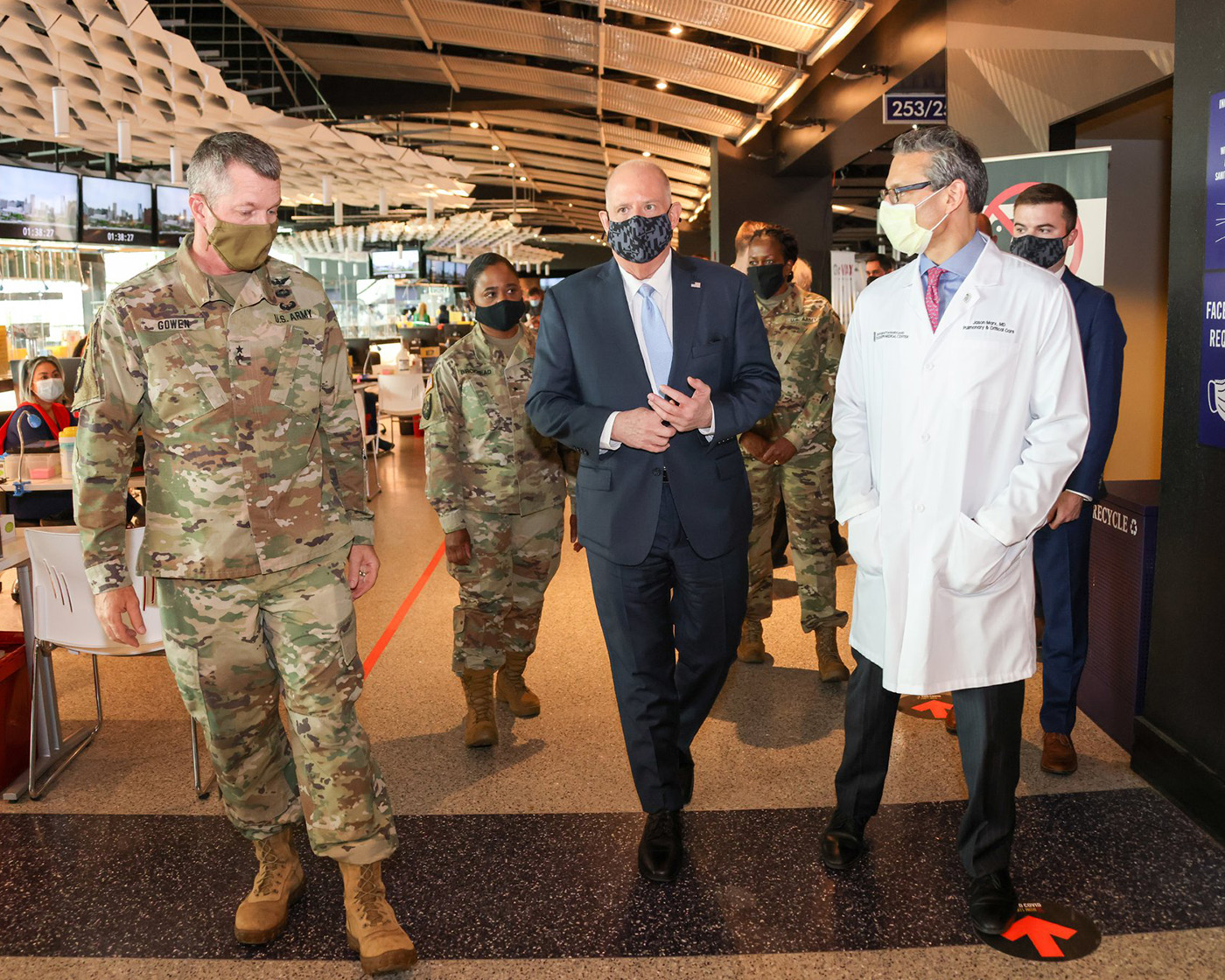 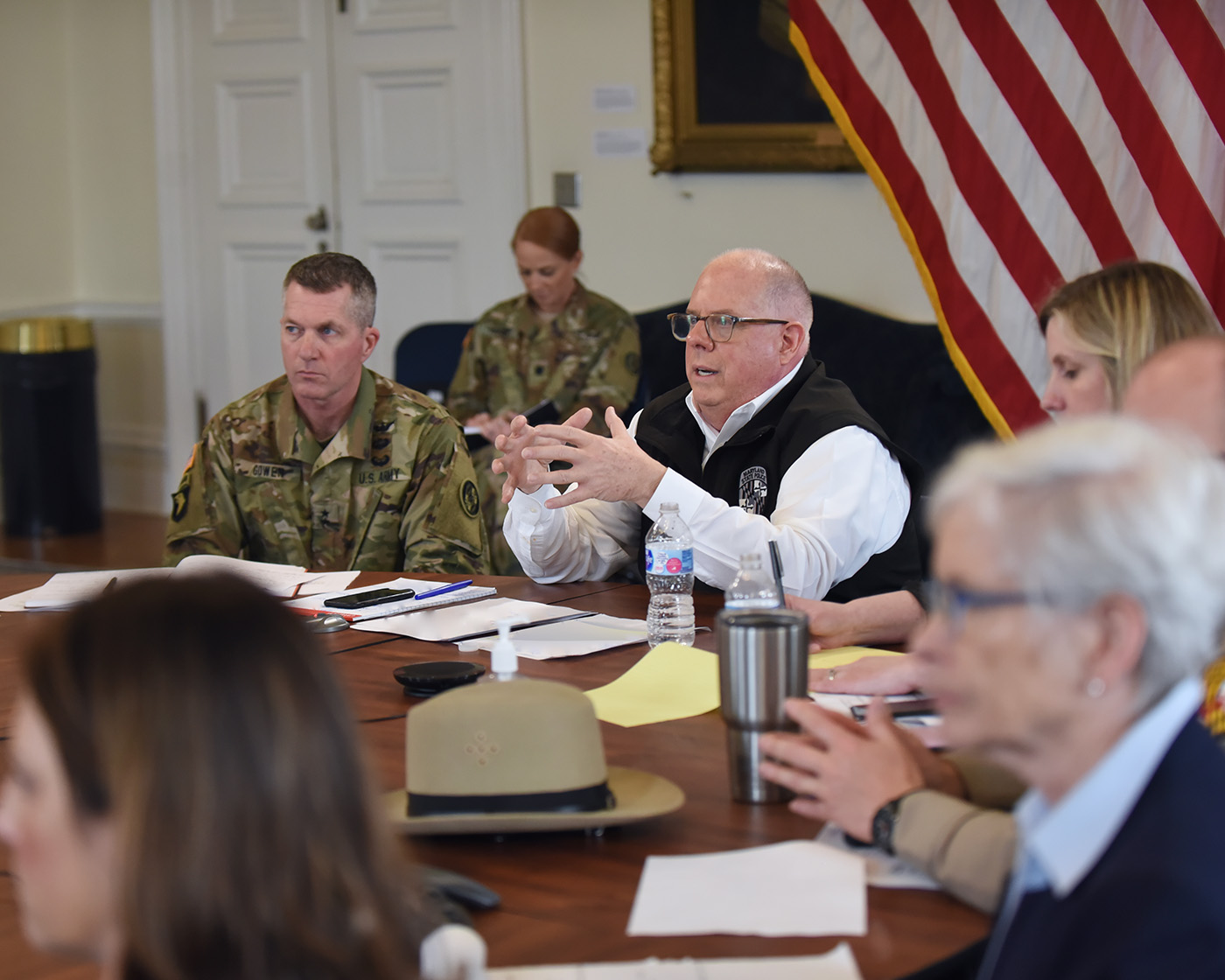 When the COVID-19 pandemic first struck the United States, Governor Hogan was Chairman of the National Governors Association. While Washington was playing partisan politics, Governor Hogan used his position to bring the nation’s governors together to keep the American people safe. During this time, Governor Hogan led dozens of meetings with all 50 governors as well as the President and Vice President.

In Maryland, Governor Hogan’s decisive and balanced response helped the state weather this crisis. As a result, Governor Hogan has maintained strong approval of his leadership on economic improvement and public health metrics, such as the state’s vaccination and booster rates.

During a time of national uncertainty, An America United worked to promote Governor Hogan’s unifying, calm, and non-partisan leadership approach. 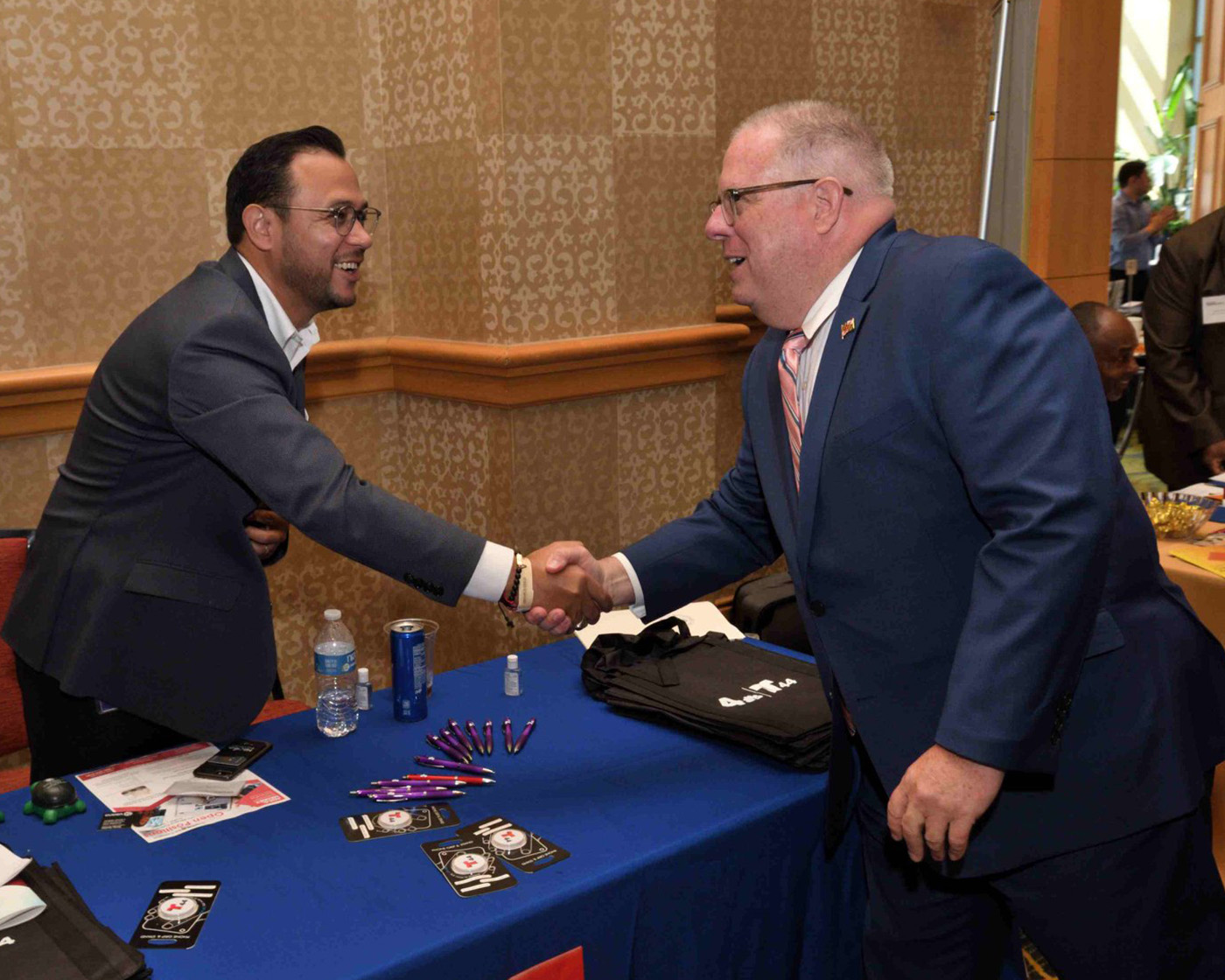 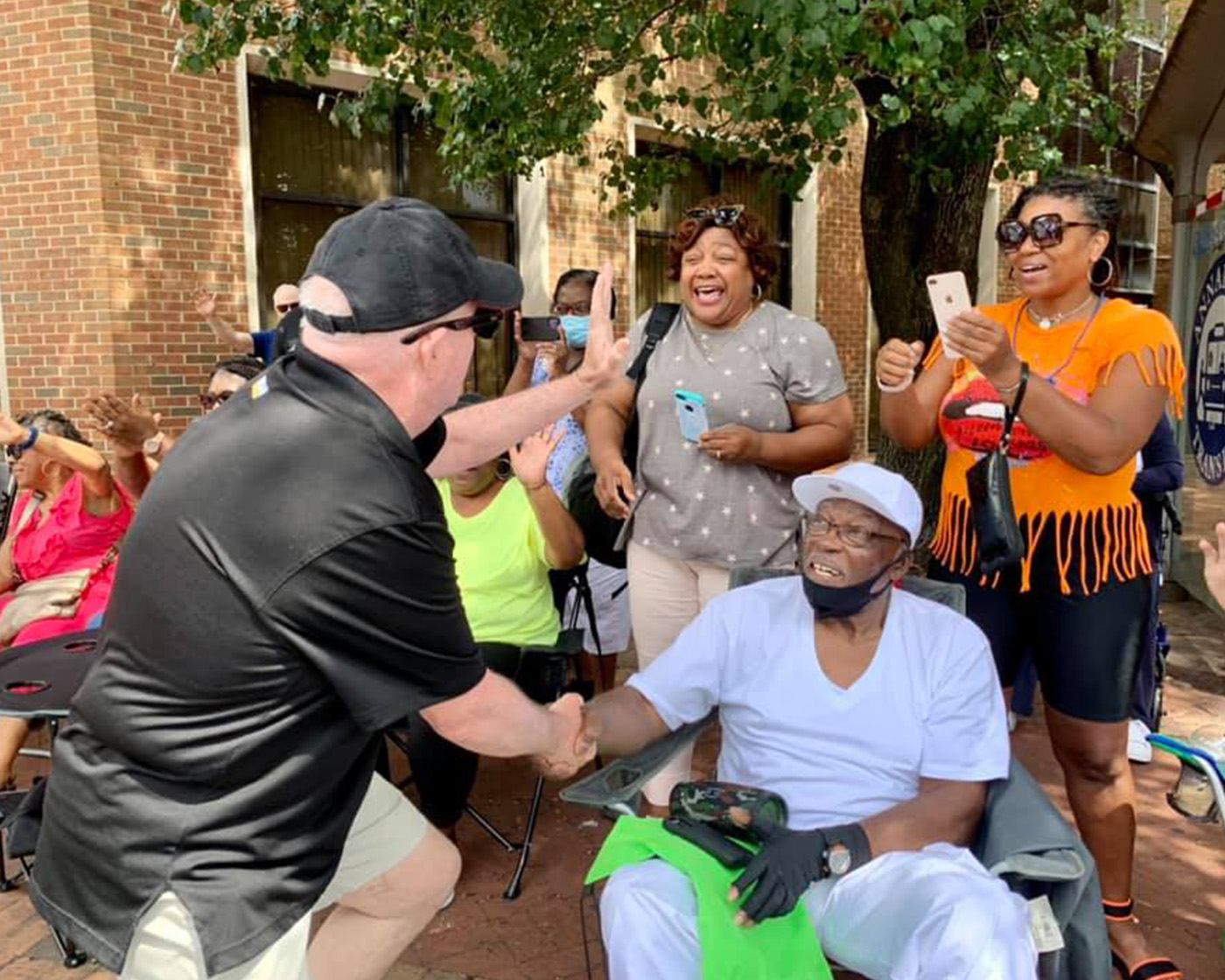 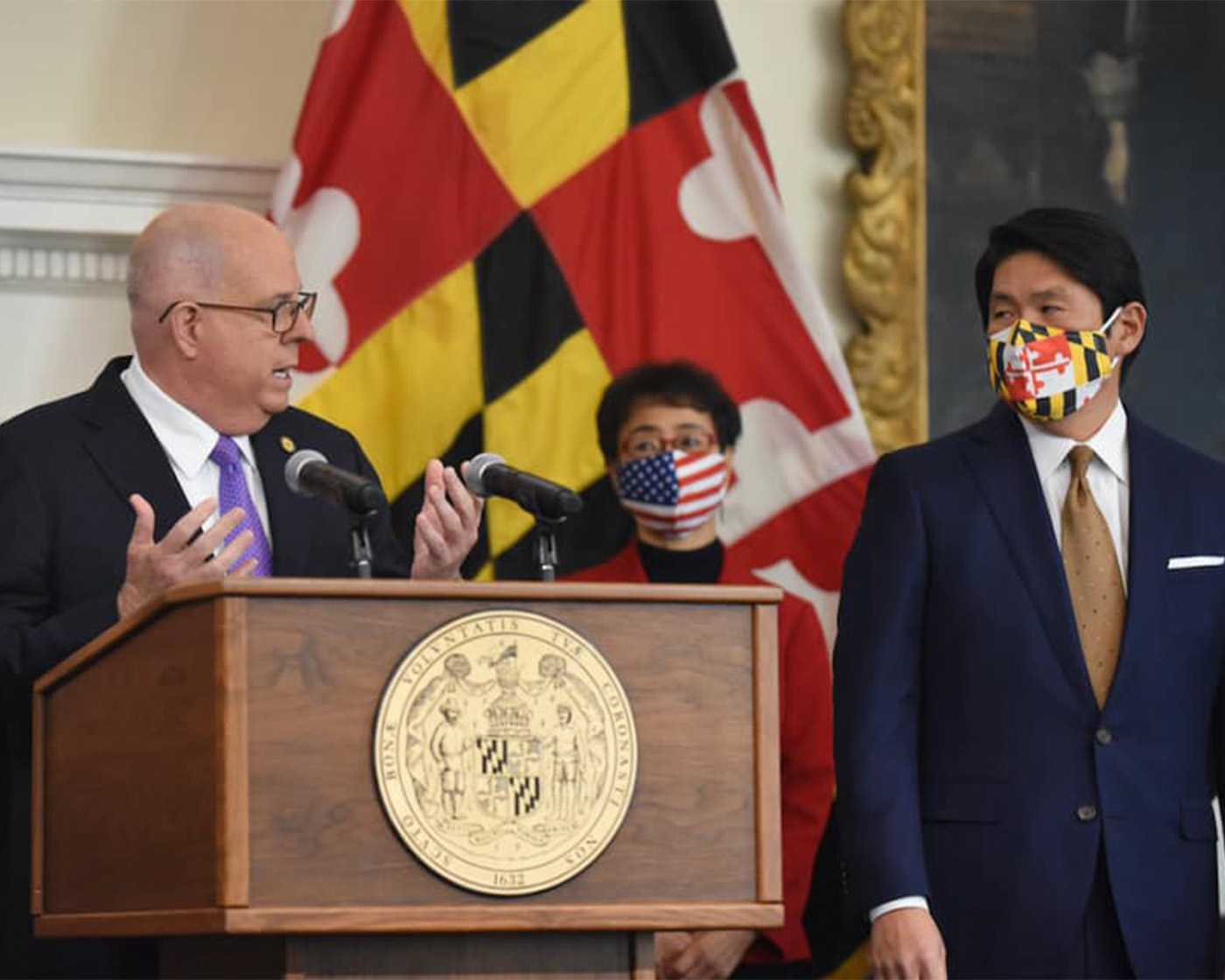 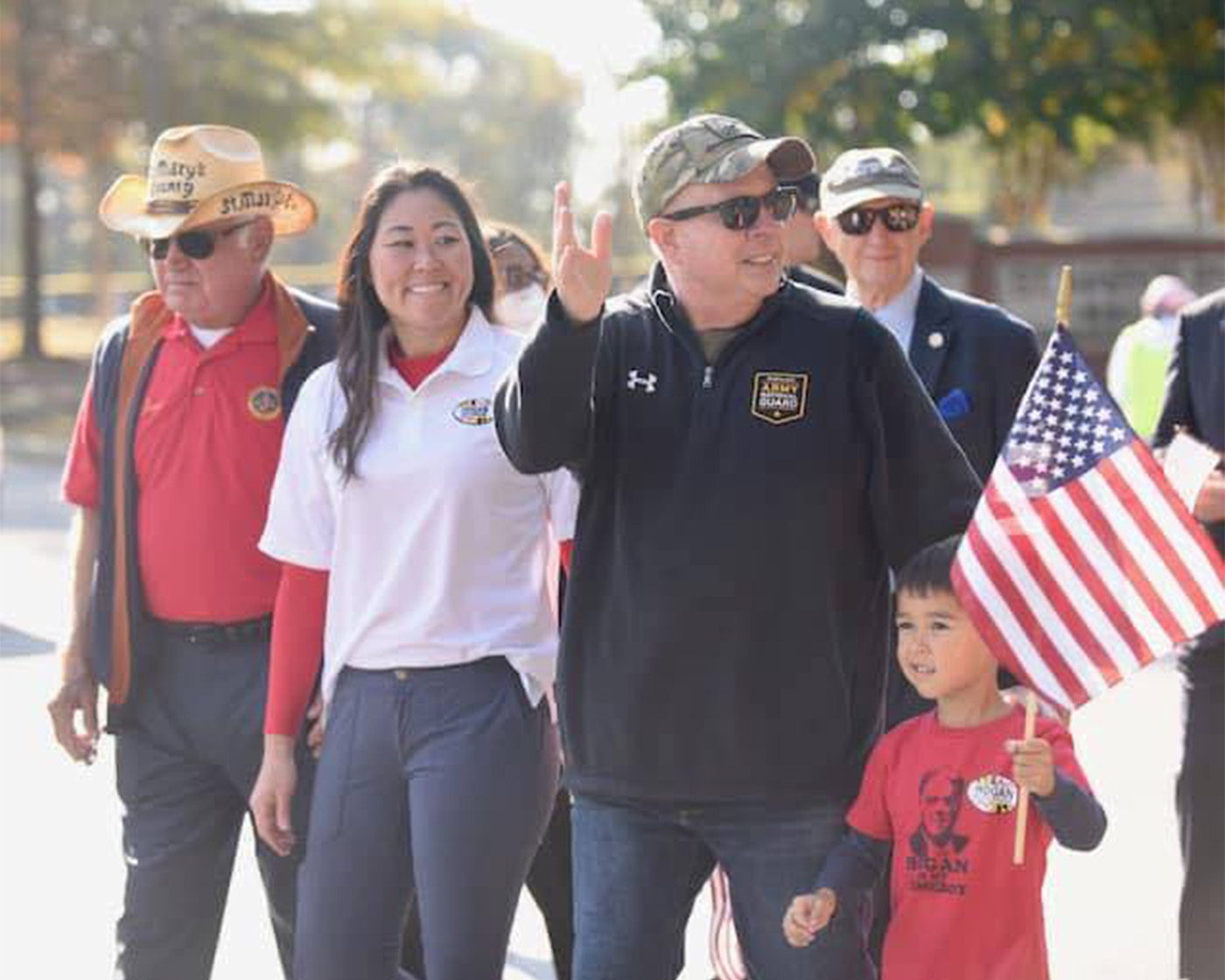 An America United believes that America’s future depends on building an inclusive and big tent Republican party, just like Governor Hogan has built in Maryland. 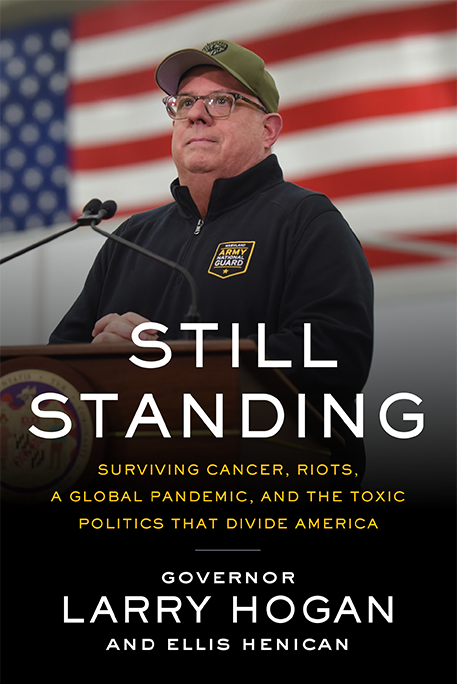